Some historical aspects of the "case Galilei" were recently examined in Physikalischen Blättern 10/1993 (the journal of the German Physical Society). The analysis of the standpoints involved in the dispute is of lastingsignificance as textbook example of an intellectual showdown. It would be useful to recall the difference between instrumentalism and realism. The instrumentalist contents himself with the best quantitative description of his observations, while the realist is interested primarily in causes. Kinematics, the Copenhagen-interpretation of quantum mechanics and "special" relativity are instrumentalistic, dynamics -on the other hand- is realistic. Both approaches to natural phenomena are in use, according to the needs of the moment. Their uncritical mixing up is, therefore, almost pre programmed and might lead to absurd conclusions. In "special" relativity, for example, it would be incomprehensible to restrict the kinematically correct symmetry/reciprocity of relative distances: r(ij) = r(j) - r(i) = - [r(i) - r(j)] = - r(ji) to the first derivatives and the second and higher derivatives as absolute! To ascribe to acceleration another quality (i.e.absoluteness) which doesn't fit into the simple symmetry/reciprocityscheme, would mean a silent transition to dynamics. As a matter of fact, it is compulsory in dynamics to ask after the causes of absolute motion. Kinematically it is indifferent whether the earth moves around the sun, or the other way around; dynamically not! We are bound to dynamical laws and the higher mobility of lower masses has always been confirmed; indeed, not the mountain is coming to the prophet, but the prophet has to undertake the trouble. This is also perfectly rational from energy considerations, too.

The "case Galilei" is well suited to an analysis within the instrumentalism vs. realism scenario. Galilei himself has never clearly distinguished between kinematics and dynamics and provided no conclusive piece of evidence for the Copernican system. Nevertheless, one has to acknowledge that his obstinacy - excepting some emotional components of the controversy- has not been rooted in instrumentalistic thinking. The Church, on the other side, argued all the time in an instrumentalistic way and saw (for a while) no danger in considering the Copernican system as a useful working hypotheses. For an unbiased presentation of the historical facts see [1] and [2]. The highlight of the Galilei case is the survival of the confrontation between instrumentalism and realism till our days. Disputes and controversies keep science alive and are necessary ingredients for the development of a comprehensive world view. However, the lack of clear and open presentation of basic assumptions, hypotheses, approximations, or their conscious disregard, might often lead to unproductive, science-retarding frictions between opponent camps. Just like the "hidden parameters" in quantum mechanics, "hidden assumptions" have to be thoroughly researched, even if such a process implies (quite naturally) uneasy questions and dogmatical reactions.

Psimopouolos and Theocharis [Nature, 363 (1993) 108] have recently pointed out the contradiction between the kinematical equivalence of Einstein's reference frames and the dynamically secured absolute motion of the earth around the sun. The only reaction was a letter to the Editor [Nature, 364 [1993) 96], totally irrelevant for the point made by Theocharis and Psimopoulos, namely: "the models of Copernicus and Einstein, respectively, are topologically different and Galilei's struggle has only shown the untenability of a theological model. Period. The objection of P.& T., however, brings to daylight a dogmatism of orthodox relativists comparable to that of the Church. The dynamically justified point of view, according to which the center of mass of a mass distribution defines a unique, privileged frame of reference, doesn't fit "special" relativistic kinematics. One encounter similar difficulties with the forcing of all known and yet to be discovered laws of nature in the procrustes-bed of the Lorentz transformation. Even formally, the Lorentz transformation is very limited. For example, d'Alembert's wave equation is only in vacuum Lorentz invariant! Even in isotropic material media, the Lorentz invariance no more holds. There is scope in pursuing such critical investigations further, by searching always after "hidden assumptions". 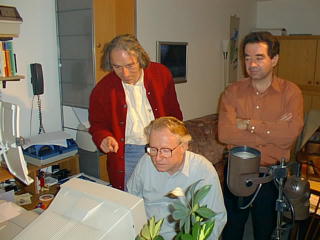 back to the head
back to index